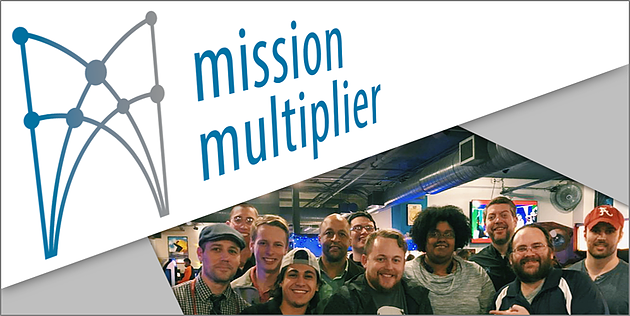 It’s important to remember where you came from. As we enter into a new year, we would like to take a step back to share Mission Multiplier’s origin story.

The story of Mission Multiplier started many years ago in Washington, D.C. A newly-married Jamie Miller was working 80 hours a week for a very prominent consulting company, leaving very little time for anything other than the job at hand. Soon after Jamie and his wife had their first son, Jamie’s boss appointed him to take the lead on a high-profile project which would end up requiring him to come in on most Saturdays and Sundays. While flattered, Jamie couldn’t fathom being able to balance the exhausting task of caring for and loving a newborn son with the role he was being asked to fill at work. But his boss refused to take “no” for an answer. Jamie was forced to take on the new role, and was left feeling overwhelmed, disconnected from his family and community, and unsupported by the company he had given so much of himself to. He told himself that if he ever started his own company, he would make it a point to value his employees both inside and outside the office.

Jamie got a chance to put that thought into practice when he and his family relocated to Huntsville, Alabama in 2013. Returning to his wife’s home state to set down roots offered Jamie the opportunity to take his 12 years of experience in the cybersecurity industry and put them to good use in a fresh environment. He knew that he wanted to do more than just drive profits, build pipelines of work, and generate revenue. He wanted to make a difference. So instead of taking another high-paying job at a major consultancy, Jamie began the long journey to building a company that, in addition to building revenue, engages employees and grows the community in very intentional ways.

Crisis hit when the TVA contract ended prematurely in August of 2016. That contract was Mission Multiplier’s lifeblood, and the loss of it put us at risk of going out of business. But crisis is just the intersection of danger and opportunity, and Jamie took this opportunity to reinvest the majority of the profits from the past year back into the company. This decision was rewarded when, just a few months later, the proposal team that included Mission Multiplier was awarded a 5-year contract with NASA. This new contract, along with the US Army contract that quickly followed it, allowed us to grow far larger than we had ever been. Mission Multiplier now has a team of fantastic individuals that spans half a dozen locations, does amazing work, and supports the community as an integral part of the company’s business model.

As we venture into 2018, Mission Multiplier is poised for even more explosive growth. The future is sure to hold more successes and more crises. Whatever we may encounter in the years to come, we stand ready to face it head-on, with conviction and the understanding that we are working not just for a company, but for the betterment of ourselves and our community.

If you, your organization or company, or someone you know would like to learn more about Mission Multiplier and what we can do for you, please do not hesitate to reach out to us. We can be reached at info@missionmultiplier.com.